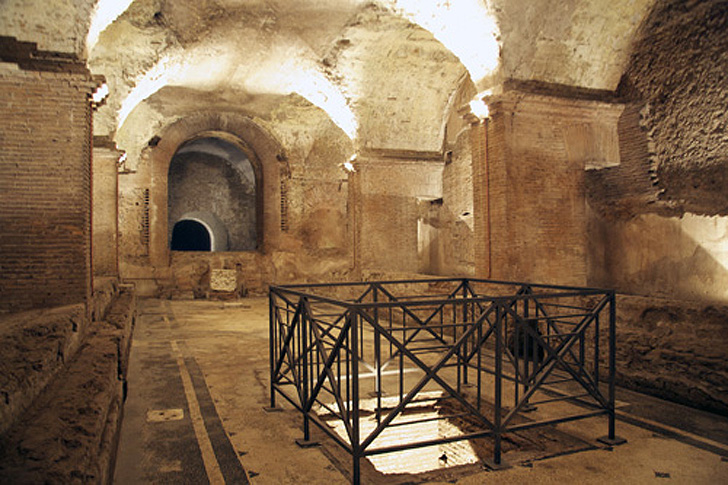 Originally discovered in 1912, this mithraeum is considered the largest documented gathering space for the worshippers of Mithras. The mithraeum, approximately 23 meters long and 10 meters wide with a soaring cross-vaulted ceiling, can be only roughly dated by the two main events associated with the bath complex: the mithraeum was certainly created after the complex was completed in AD 217, and it was probably no longer in use when the aqueduct supplying the complex was cut during the Greco-Gothic Wars in 537. In reality, it probably went out of use long before 537, since most scholars hold that Christianity had supplanted Mithraism as a “religion for the masses” by the early 4th century.

Today, a visit to the mithraeum can be considered a brief one, as what is available to us are primarily two chambers: a small square ante-chamber and the main rectangular meeting hall. Apart from a recently-restored fresco of the god (missing the face, unfortunately – presumably hacked away by Christians), there is very little left of the decoration, which was probably very lavish. The well-preserved podium structures on either long side, on which the worshippers reclined during ritual meals, give an excellent idea of the context and purpose of the shrine. Certainly the most intriguing feature is the small tunnel that runs under the center of the main hall into an adjoining room, where there is an entrance/exit with staircase; this has been identified with some controversy as the fossa sanguinis, the ritual pit over which the bull at the center of the Mithraic mythology was slaughtered, bathing one or more initiates in its blood.

Its location, off a dirt road adjacent to the main entrance, is part of a subterranean area of the Baths of Caracalla. The mithraeum space is just one part of the massive, sprawling system of underground corridors that honeycombs the large artificial platform supporting the Baths of Caracalla. Beneath the thermae complex lies a warren of tunnels with furnaces, stoked by slaves, and storage areas for supplies, including wood. Though access to these tunnels is today only partial, there are confirmed plans to extend the conservation and restoration work to make more of these areas accessible, including a substantial area dedicated to grinding grain using the water that passed through the baths.