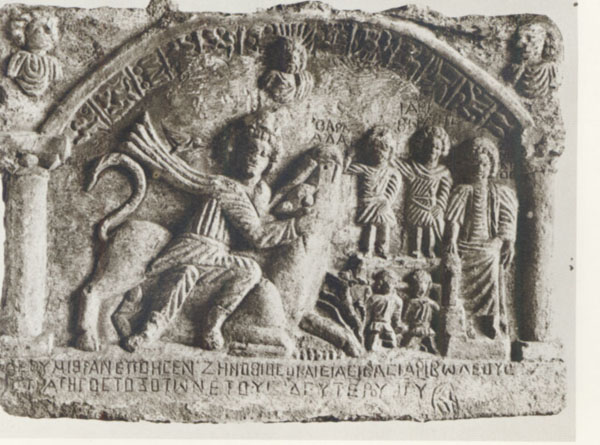 Mithras tauroctone in Eastern attire (Phrygian cap, cloak, tunic, trousers) sits fulls front on the bull's back. Between the knee and left fore leg of the bull there are seven small altars. Scorpion and torchbearers are lacking; a small dog and a snake try to reach the bull's wound. On the top of Mithras' cloak perches a raven which faces the god. Above Mithras' head the bust of a bearded god (Saturn-Serapis) who wears a kalathos and radiate crown. On either side the outlines of a bust, now sliced off but originally in relief (Sun and Moon).

In front of hte bull-killing a group of three persons has been represented. "The largest figure is Zenobius who stands on a square stone base near the right column. On the left hand side of the same base stands a small thymiaterion upon which Zenobius places incense with his r.h. He is clothed in a undergarment with half lenght sleeves cut in heavy folds. The upper garment is a mantle which forms a skirt reaching to the tops of his shoes. Zenobius is unbearded and faces front". He wears a small skull cap. To the right of Zenobius is a ledge supported by two Atlantes-like kneeling figures. On this ledge two smaller persons are standing, whose names as well as that of Zenobius have been cut out near their heads: Jariboles and Barnaadath. Both wear trousers; their upper garments extend down to the knee; Jariboles only wears a mantle. He carries a sword attached to a belt about his hips; his left hand rests on the sword at his side, but his right arm is lifted. Barnaadath presses his left hand across his left hip; with his right arm raised he makes a gesture of adoration by turning the palm to the front, extending the thumb, and doubling the fingers into the palm.

"Rising form either isde of the base of the relief is a round column standing on a square block and carrying a capital, on which are square abaci from the inner edges of which springs a low arch. Beneath this arch is a beveled surface which is occupied by the twelve signs of the Zodiac. These signs begin with the Ram on the extreme left and end with the Fish in the extreme right. With the exception of the Crab and the Archer all the signs face toward the left. Above the back of the Ram there is what appears to be the sun, an incised circle; over the Bull is a small crescent moon; between the heads of the Twins there is what seems to be a star; over the Lion there is a round disc, which may represent the sun. Similar discs appear near the Crab and the Virgin. The last six signs show no subsidiary representations".

In the upper left hand corner, above the arch, is a dressed bust facing to the right (summer); to it corresponds a bust of winter in the other corner. These two busts, however, "were covered with the plaster of the niche in the late period, and so were removed from side at the same time that the busts of Sun and Moon were cut away".

"Above the relief were six symmetrically placed holes either for hooks to suspend lamps or for a curtain across the relief".