Enter
The fraternal order that focussed on the worship of the ancient Iranian god Mithra was probably formed in Iran, Armenia, and Pontus (the southern coastal region of the Black Sea in eastern Anatolia, present-day Turkey). Travelers and colonists from these countries, and Roman soldiers stationed in the East, brought the cult of Mithra into the Greco-Roman world, where it was very widespread. Mithraism and Freemasonry have many common aspects. Though the lines of historical continuity are extremely difficult to trace, it is possible that some aspects of the ancient fraternity were transmitted to and survive in the Craft of today. The charter of a fraternal order that existed in the city of Erznka, in medieval Armenia, has Christian features identical to some of those encountered in Freemasonry. It is possible the structure of the ancient Mithraic brotherhoods endured, and changed, in a manner parallel to what we encounter in the evolution of Masonry in the West. I have published a translation of that charter with a discussion of fraternal orders in the medieval Near East, which interested readers may consult.

I have been asked to comment on a thesis which would connect Freemasonry so explicitly to a "pagan" religion. Fundamentalist and other Christian organizations have attacked Masonry often on these grounds, and the assault in America and Britain in recent years has been severe. Baptist Masons have been told their Masonic affiliation is incompatible with membership in their Church. Masons have assumed a defensive, even apologetic posture in response to these charges, and I believe this is a mistake.

Masonry is a secular fraternity and does not require belief in any particular revelation, but only in the existence of one supreme Divine Being. On this basis not only can Hindus, Moslems, Zoroastrians, Christians, and Jews be Masons, but also so could many so-called pagans like Xenophanes or Sokrates, who believed one eternal, superior principle governed all divine and earthly phenomena.

As a scholar I am obligated to evaluate the evidence as best I can, without respect to any ideology or predetermined conclusion. If the facts persuaded me that the earliest Freemasons were headhunters, then that is what I would write. Mithraic origins for some aspects of Masonic ceremonies are ultimately no more significant than Druid origins for the Christmas tree or fertility cult origins for the Easter egg. What is significant is how our fraternity employs and interprets these symbols today. As Pamina loudly sings in The Magic Flute, when they stand at Sarastro's (Zoroaster's) temple and Papageno asks, terrified, what they should now say, "Die Wahrheit, die Wahrheit, sei sie auch Verbrechen!" (The truth, the truth, even if it were a crime!)

It has long been recognized that there are very many similarities between the initiatory rituals and symbolism of the ancient Mithraic mysteries and those of modern Freemasonry. The Mithraic mysteries flourished in the Roman Empire from the second century A.D. to the fourth, when the triumphant Catholic Church decisively suppressed them. For speculative craft Freemasonry we have firm documentation from only the 16th century. Thus, there is a gulf of twelve centuries. What we know of Mithraism, except for its abundant iconography, comes mostly from the writings of hostile Christians or sympathetic pagans. These include the Neoplatonist Porphyry, De Antro Nympharum (On the Cave of the Nymphs), or Plutarch, De Iside et Osiride (On Isis and Osiris), and the last pagan Roman Emperor, Julian the Apostate. Documents of the order itself are scant and often cryptic, but there are many grafitti, in Greek and Latin, from various spelaea (caves, as Latin-speaking Mithraists called their temples). These spelaea range from Hadrian's Wall at the northwestern edge of Roman Europe all the way to Dura Europus in Syria, on the Euphrates frontier in the southeast.

The most important of these inscriptions for the reconstruction of Mithraic doctrines are a handful of hexameters, apparently excerpted from Latin Mithraic hymns. These hexameters were painted on the walls of the Mithraeum (Mithraic sanctuary) discovered beneath the church of Santa Prisca at Rome. Greek Magical Papyri from Egypt contain a spell for the invocation of Mithras and a description of the vision of the god. Albrecht Dieterich published this text around the turn of the century, optimistically calling it a Mithraic liturgy. However the rituals therein prescribed, which include the repetition of long lists of vowels and nonsense syllables, are those of magicians, not adherents of a mystery cult. So the text seems rather to draw on Mithraic imagery and belief to lend power to magical rites unconnected with a canonical faith. Similarly other papyri of this kind employ the raw material of the Olympian and Egyptian pantheons, or of Judaism and Christianity.

We have at present only two papyri of continuous texts belonging to the Mithraists themselves. Both papyri are in a very fragmentary state of preservation, and both are from Egypt (whose climate was favorable to the preservation of such perishable documents). In 1933 Franz Cumont published a Greek papyrus of an obligation with many gaps; it was an oath taken by an initiate not to divulge the mysteries he had witnessed or was to witness. Another, severely damaged Greek papyrus from 4th-century Hermoupolis, Egypt, published by William Brashear in 1992, consists of a catechism, in question and answer form, about the degree of Leo (lion). This is the fourth of seven grades of initiation in Mithraism. It was with Leo that one became a full member of the order—like a Master Mason as compared to an Entered Apprentice or a Fellowcraft.

The obligation mentions "sharp goads" and a word reconstructed by Cumont as Cautopates. Cautopates was one of the two Mithraic torchbearers, the other named Cautes. Frescoes often depicted the two flanking the entrance to the main chamber of a Mithraeum. There seems to be an allusion here to officers of the order conducting and receiving a candidate for initiation; this is analogous to the work of Masonic Masters of Ceremony. The candidate, as we know from both descriptive testimonia and the Mithraic frescoes themselves, was hoodwinked, and his hands were bound.This excerpt is from Heredom, the transactions of the Scottish Rite Research Society. 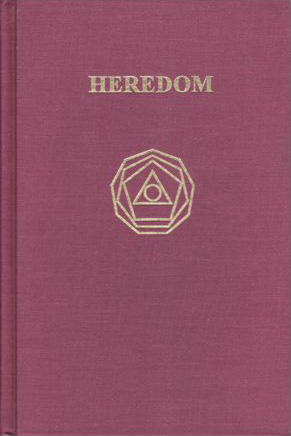