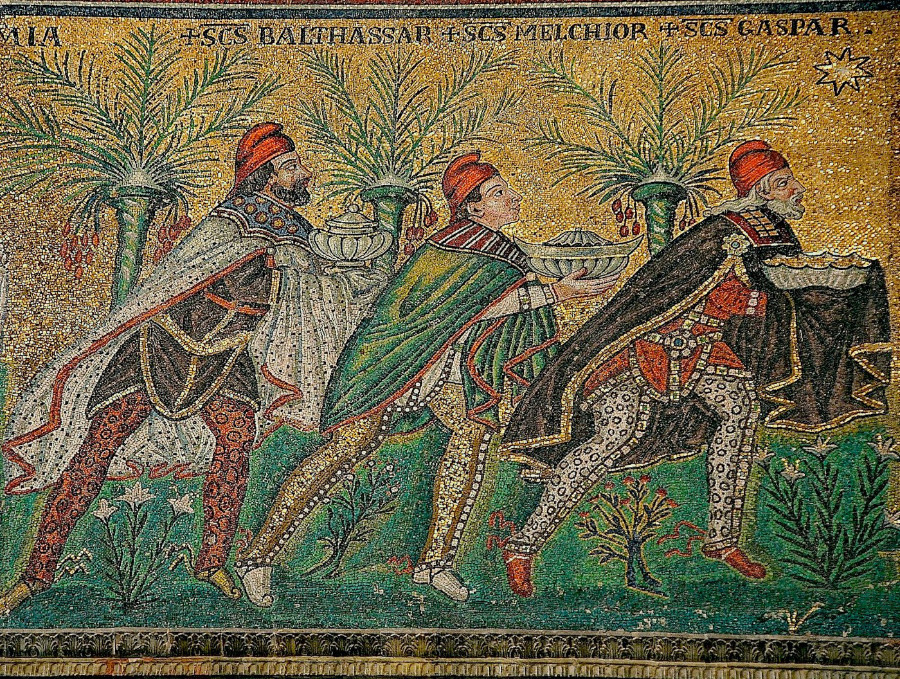 Mosaic of the Magi’s Adoration at the Basilica of Sant’Apollinare Nuovo in Ravenna, Italy (completed ca. 526 CE)
Wikipedia

In the ancient world, headgear was a primary way of identifying with a glance, the status, trade, gender, ethnic background, and religion of an individual. One could often spot a craftsman in their conical felt hat (in Greek, a πῖλος, in Latin a pileus or pilleus) or recognize a farmer from their wide-brimmed caps used to keep the sun off while bringing in the harvest.

While elite Roman men were often seen without hats, women and those of certain social statuses frequently had their heads covered while in public. In the fourth century BCE, a round straw hat with a raised center called a tholia came into vogue among Greek women. Moreover, a Roman woman in mourning used a head scarf called a ricinium that was likely dark in color. During mourning, this scarf replaced the traditional female head covering called a palla and told people who encountered her that she was a widow.

Hats were also a way of identifying foreigners in both life and art. The pileus was a hat popular within the area of Phrygia, an Anatolian kingdom which is now part of modern-day Turkey. It was made of either wool or felt and the top slumped forward. This Phrygian cap, as we call it today, was a way of identifying easterners like Amazons, Dacians (of modern Romania and Serbia), or Phrygians. Ancient artists often depicted mythological figures said to be from the eastern Mediterranean in this headware, men like the Trojan Aeneas, Ganymede, or Perseus.

The cap was also part of the iconographic clothing worn by the god Mithras, an eastern deity born from a rock who would later become popular in the Roman Mediterranean during the second and third centuries CE. Mithras was an Indo-Iranian god at the center of a mystery cult — meaning that initiates kept many of the rites and beliefs secret. He was fashioned as a sun-god and bull killer within his Roman context.

And temples, constructed to honor him, called mithraea, were a reflection of the cosmos itself. Often Mithras was depicted in the center, slaying a bull. Frescoes and reliefs of Mithras preserve the stunning color that decorated these underground mithraea. Their existence under the earth often helped to preserve the color so they may be viewed today. By some counts, 400 archaeological sites show evidence for the worshipping of the god and his cosmos.

Read the entire article on Hyperallergic.