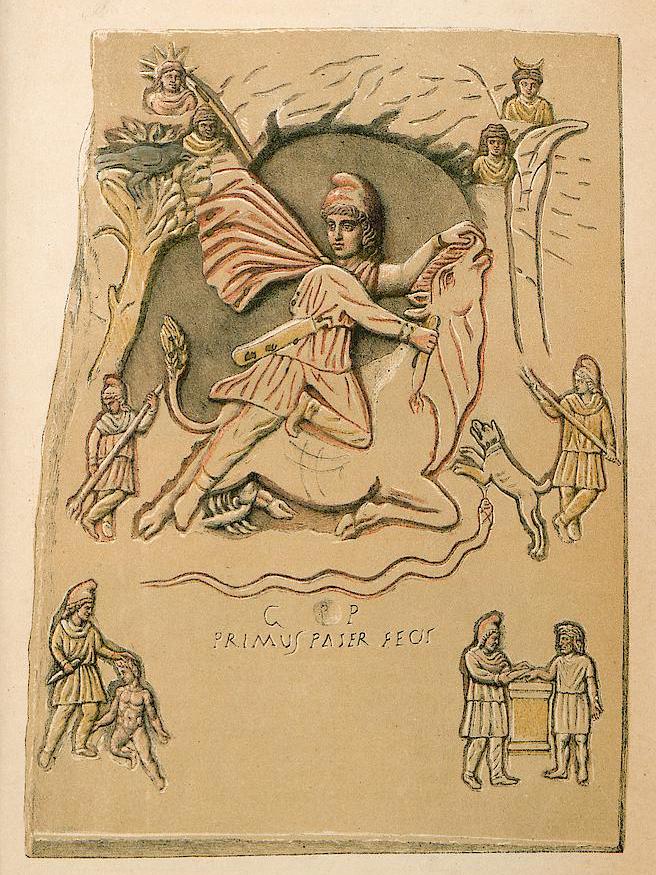 The relief is worked as an engraving. Mithras in Eastern attire with a sheath at his side, kills in a cave the bull whose tail ends in ears. Two strips on its body seem to indicate a large band. The dog with collar near the wound; the serpent creeps over the ground; the scorpion at the testicles. Near the cave on each side a tree; the raven is perched on the branches of the left one. On either side of the main scene Cautes (r) and Cautopates (l) in Eastern attire; cross-legged.

The Mithraeum located in Piazza Dante in Rome was discovered in 1874 along with a series of monuments dedicated by a Pater named Primus.

Taurcotony statue of the Esquiline Hill

Except for the serpent, the sculpture of the taurcotony found on the Esquiline Hill lacks the usual animals that accompany Mithras in sacrifice.

Mithras petrogenitus of the Esquilino

The relief of Mithras being born from the rock of the Esquiline shows the young god naked, as usual, with a torch and a dagger in his hands.

The relief of Sol was found during the construction of Piazza Dante in Rome in 1874.