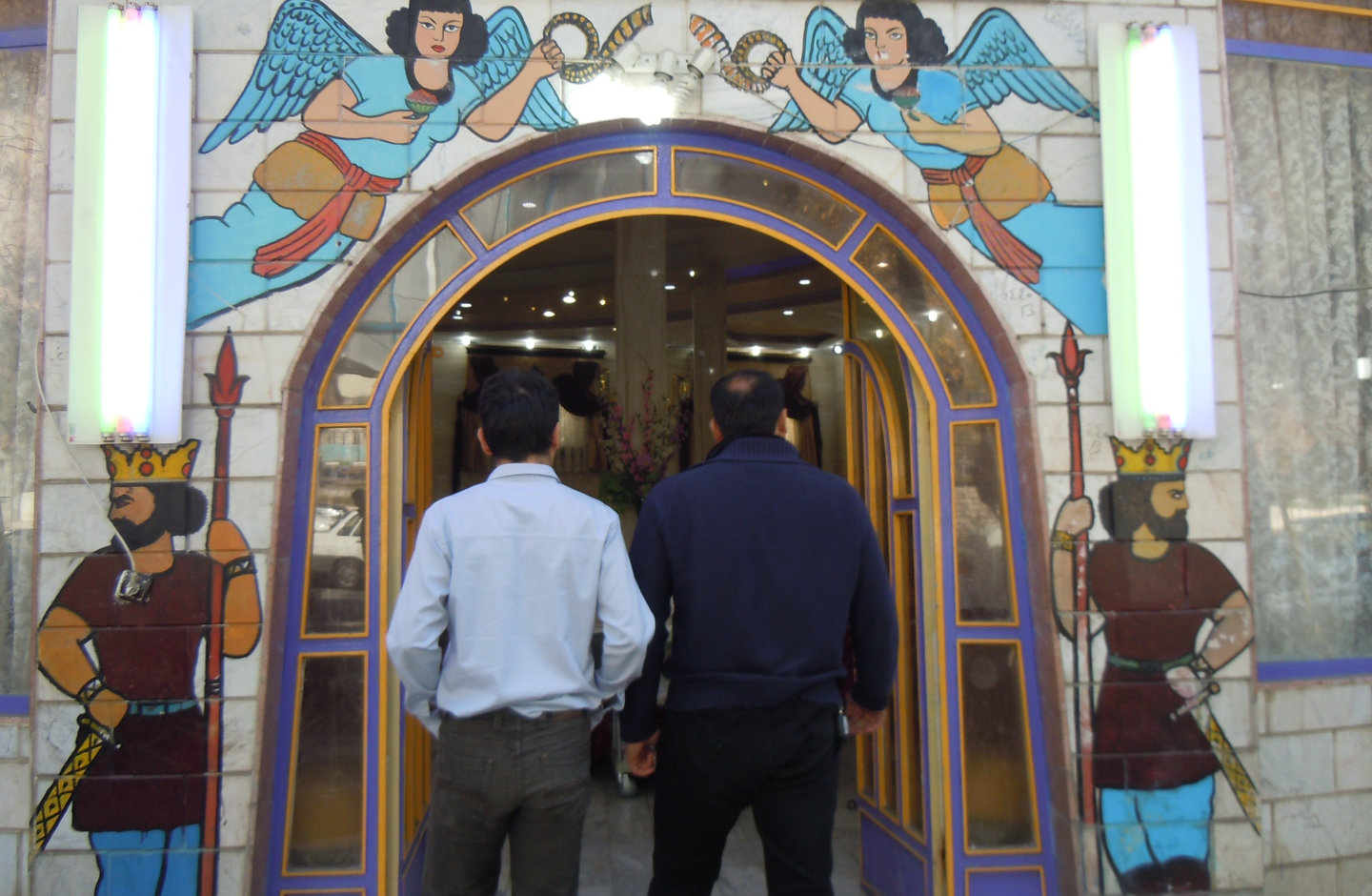 Two men from behind at the entrance to a restaurant in Tāq-e Bostān.
Rachel Wood

What struck me most upon arrival at Tāq-e Bostān was the dramatic character of the site itself. The crisp winter sunshine glistening on the lake and making the mountains gleam warmly under a blue sky no doubt helped, particularly after coming from the dusty hubbub of the city of Kermānshāh 5km away. At the base of the outcrop are carved three Sasanian monuments which look out over the lake that was probably created by their Parthian predecessors, perhaps as the focal point of a royal hunting enclosure (paradeisos). The current inhabitants of the lake – geese, ducks, and a rowing boat – certainly contribute to its idyllic character. 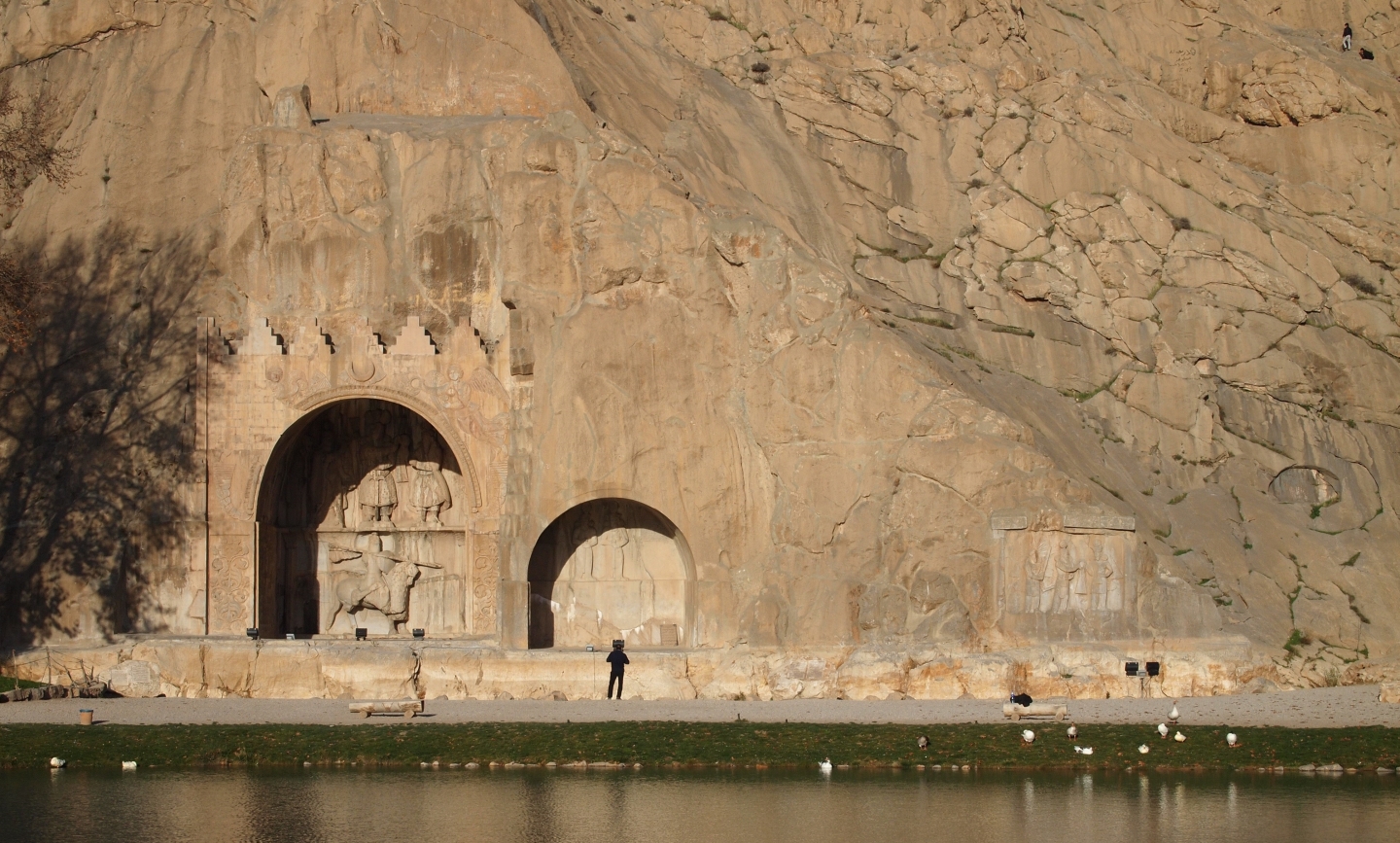 The earliest of the Sasanian carvings at Tāq-e Bostān, on the eastern end of the promontory, is a panel carved with a figural relief that acts as the focal point for the fourth chapter of our Images of Mithra volume. On the left stands a radiate figure identified as Mihr (Mihr in Pahlavi/Middle Persian, and Mithra in the Avestan language of the Zoroastrian sacred texts, the Avesta). Mithra in the Avesta is the protector of oaths and contracts, a solar yazata (divine being – literally meaning ‘worthy of worship’) who rides in a chariot before the Sun, emanating his own light. He also happens to be guardian of cattle, in sharp contrast to the Roman Mithras tauroctony scenes! A vow sworn in the name of Mithra was the most sincere, as Mithra would smite those who break their oaths, and is something to be seen in the context of Zoroastrian central tenet of asha – meaning truth, order, and justice. 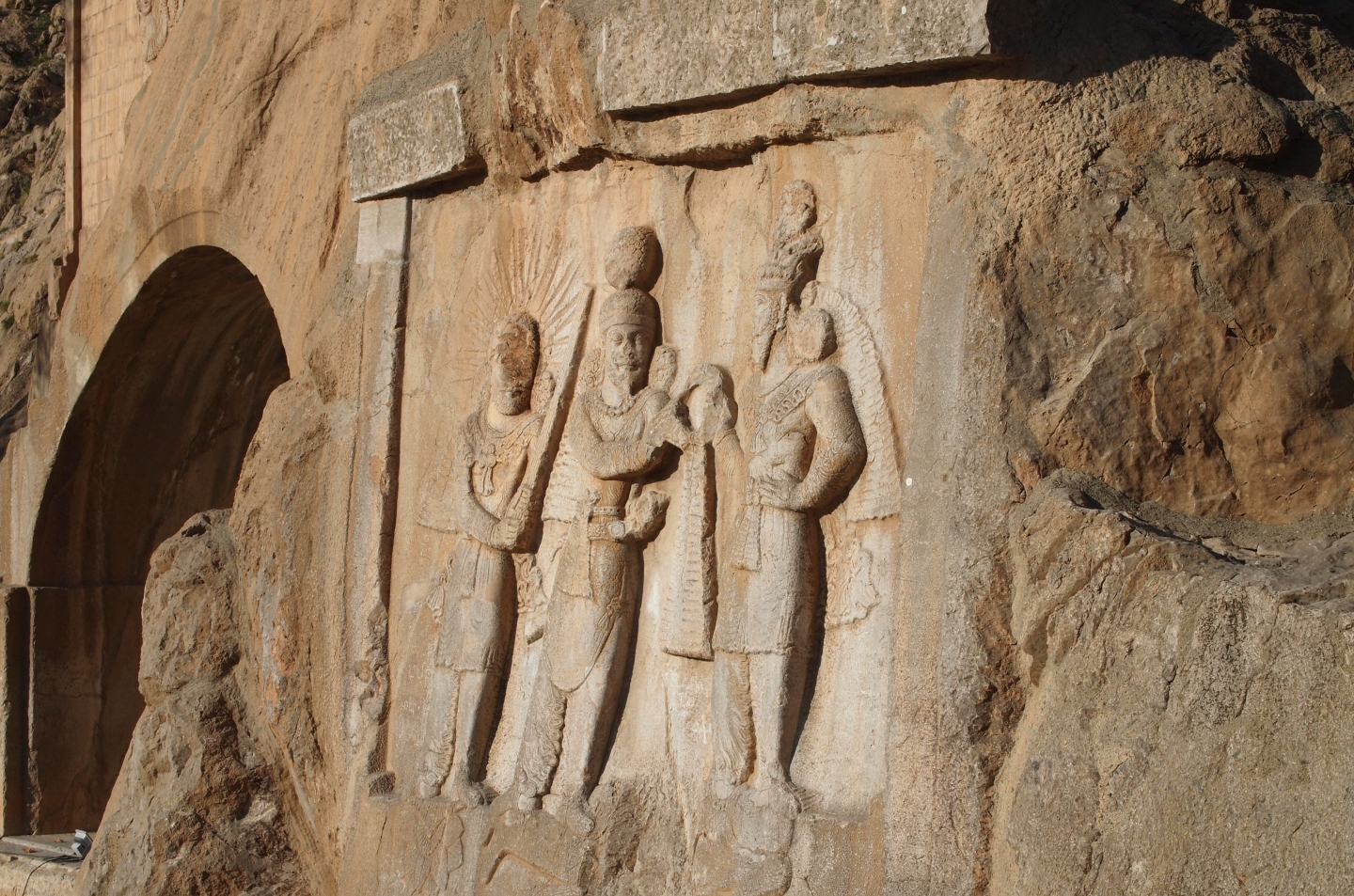 In this scene, Mihr watches over the transition of power from Shapur II to Ardashir II, which took place in AD 379, symbolically represented by the passing over of a ribboned wreath. The ribboned wreath or ring is a common motif in Sasanian art, and in Parthian reliefs before that, used to show the bestowal of divine glory (Middle Persian farr, Avestan khwarneh) when given by gods, or of legitimacy, approval and honour when passed between mortals. Shapur and Ardashir stand on the fallen figure of the Roman emperor Julian, who died in 363 after a defeat by Shapur near Ctesiphon. Mihr stands on a lotus flower, which may once have appeared as if it were rising out of the water that springs from the ground nearby. He holds the barsom, a bundle of rods held during Zoroastrian ritual and still used today, although metal rods are used instead of wooden. 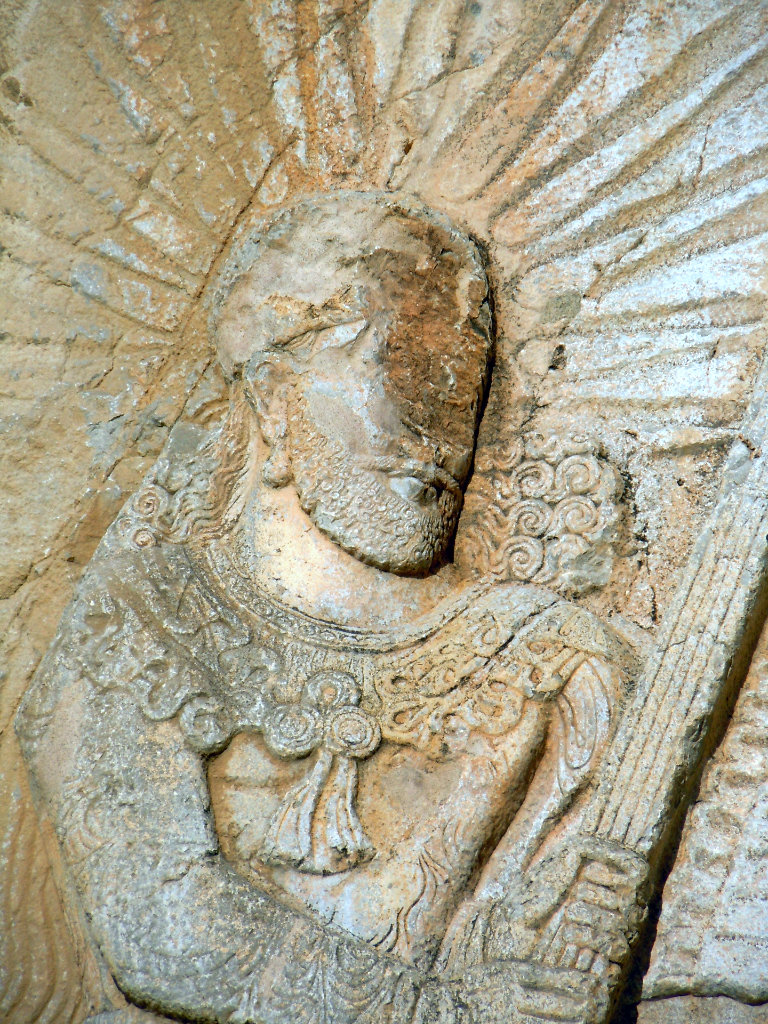 This is the only one of over 30 Sasanian rock reliefs to show Mihr. Here is the nub of the problem. So much of the extant Sasanian art belongs to types of material commissioned by kings or the very highest echelons of society: monumental rock reliefs, intricately decorated and gilded silverware, and coins. It is all too easy to forget that and to take these as representative of the visual and religious conceptions of everyone living in the Sasanian Empire (Erānshahr). To take the rock reliefs as indicative of a clear religious policy of particular kings is also a tricky path, since the monuments fulfil other criteria: of celebrating the power of the kings and the success of their rule.

[…] Meanwhile, the image of Mihr at Tāq-e Bostān was re-identified over the centuries as the prophet Zoroaster and in local Kurdish tradition as the legendary sculptor Farhād, who features in the 10th-century Iranian epic by Ferdowsi, Shāhnāmeh. This tale links the first and third Sasanian monuments at Tāq-e Bostān together, since Farhād was in love with the intended wife of Khosro II, Shirin. Farhād is said to have killed himself at nearby Bisitun upon hearing the false information (sent by Khosro) of Shirin’s death. Alternatively, the radiate figure has been identified as Ahura Mazda (in Middle Persian, Ohrmazd) the central divinity of Zoroastrianism who is embodied by light, or Verethragna (Vahrām) the yazata of victory, and Ādur (Ātaš) – fire.

The identification of this depiction of Mithra with Zoroaster became so strong that it is this Sasanian image that was the basis for modern representations of the prophet worldwide. In the nearby city of Kermānshāh, is a tekiye (a Shi’a sacred place to commemorate the death of Imām Husayn at the Battle of Karbala in AD 680 – see Fuschia Hart’s blog post) built in 1897 and extensively renovated in 1912. On the high walls of the pristine courtyard, hundreds of glazed tiles bring together images of Achaemenid, Parthian and Sasanian kings from ancient rock reliefs, to sit alongside images of more modern Persian rulers – of Safavids and Qājārs – as well as mythical Iranian heroes such as Rostam, who features prominently in the Shāhnāmeh. One of the figures is labelled Zardosht (Zoroaster)…

Read the entire article on Empires of Faith.

With a history of use extending back to Vedic texts of the second millennium BC, derivations of the name Mithra appear in the Roman Empire, across Sasanian Persia, and in the Kushan Empire of southern...