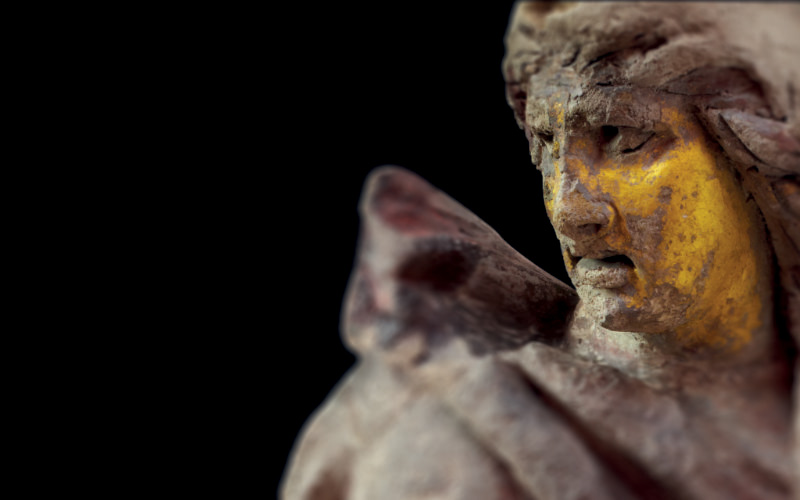 Fragment of Mithras looking away while sacrificing the Bull.
Mithra Project

The Royal Museum of Mariemont in Belgium, the Museum of Saint-Raymond in France and the Archaeological Museum of Frankfurt in Germany are organising three complementary exhibitions on the Roman cult of Mithras. The Mystery of Mithras: Exploring the heart of the Roman cult is a first exhibition for the general public on the Mysteries of Mithras celebrated among large communities of followers throughout the Roman Empire between the 1st and 4th centuries.

International experts collaborate to present the results of current archaeological research and examine the history of the reception of the cult of Mithras up to modern times. The result is a new and comprehensive view of this deity and his fascinating cult, in the form of a central travelling exhibition complemented by the expertise of each partner institution, and several scientific meetings on the subject.

The exhibition opens at the Royal Mariemont Museum from 20 November 2021 to 17 April 2022. It invites visitors to question this enigmatic cult in an attempt to unravel some of the many mysteries surrounding the god Mithras. Why was this cult organised out of sight? Why was Mithras so successful to the point of appearing as a rival to Christ?

To explain one of the most original cults the ancient world has ever known, the exhibition presents a number of archaeological artifacts, some unveiled for the first time, from public and private collections in more than fifteen European countries. The immersive scenography allows visitors to enjoy a participatory experience and to understand the remarkable story of Mithras through the prism of contemporary social issues, such as the circulation of goods, ideas and people, gender relations or the coexistence of cults.

The exhibition continues at the Saint-Raymond Museum, Archaeological Museum of Toulouse, from 14 May to 30 October 2022. In this case, it focuses on the expansion of the phenomenon of the cult of Mithras in south-western Europe, with selected works from Spain and Portugal.

To address the reasons for the progressive decline of the cult from the 4th century onwards, the exhibition proposes a series of analyses: the eastern origins of the god, the emergence of the cult in the context of Roman polytheism, the main stages of its spread and expansion throughout the Western Roman Empire, the structural specificities of the Mithraic sanctuaries and rituals, and the identities of the devotees and the organisation of their communities. The exhibition also presents the lasting influence of Mithras and Mithraism on contemporary popular culture.

The exhibition closes its tour at the Frankfurt Archaeological Museum. From 19 November 2022 to 15 April 2023, visitors will see there the returned monuments of the Mithras cult from the Roman city of Nida, Frankfurt am Main-Heddernheim, together with other artefacts from the region.

The outstanding finds from the Mithraic sanctuaries in Nida, which attracted the attention of archaeologists as early as the 19th century, are a central component of the exhibition, and together with the Mithras artefacts from the Limes region on the Rhine and Danube, they form the core of the Frankfurt exhibition. Monuments from ancient Gaul and Italy will also show the similarities and differences between the border regions and the western cultural centres of the Imperium Romanum.

The Mithra Project is co-funded by the Creative Europe programme of the European Union.