Stockstadt mithraeum is not located at Saalsburg Kastell. Stockstadt is at least 30 Kilometers from Saalburg to the southeast. Stockstadt had its own fort (kastell) on the Limes. I wrote an article on Stockstadt fot Our Common Sun about ten years ago. I have been to Stockstadt and there is an excellent museum there.

The Mithraeum I in Stockstadt contained images of Mithras but also of Mercury, Hercules, Diana and Epona, among others.

The New Mithraeum
Many thanks for the information, John. The page has been updated.
March 2022
Monumentum
John Brant

Workman digging in a field near Dormagen found a vault. Against one of the walls were found two monuments related to Mithras. 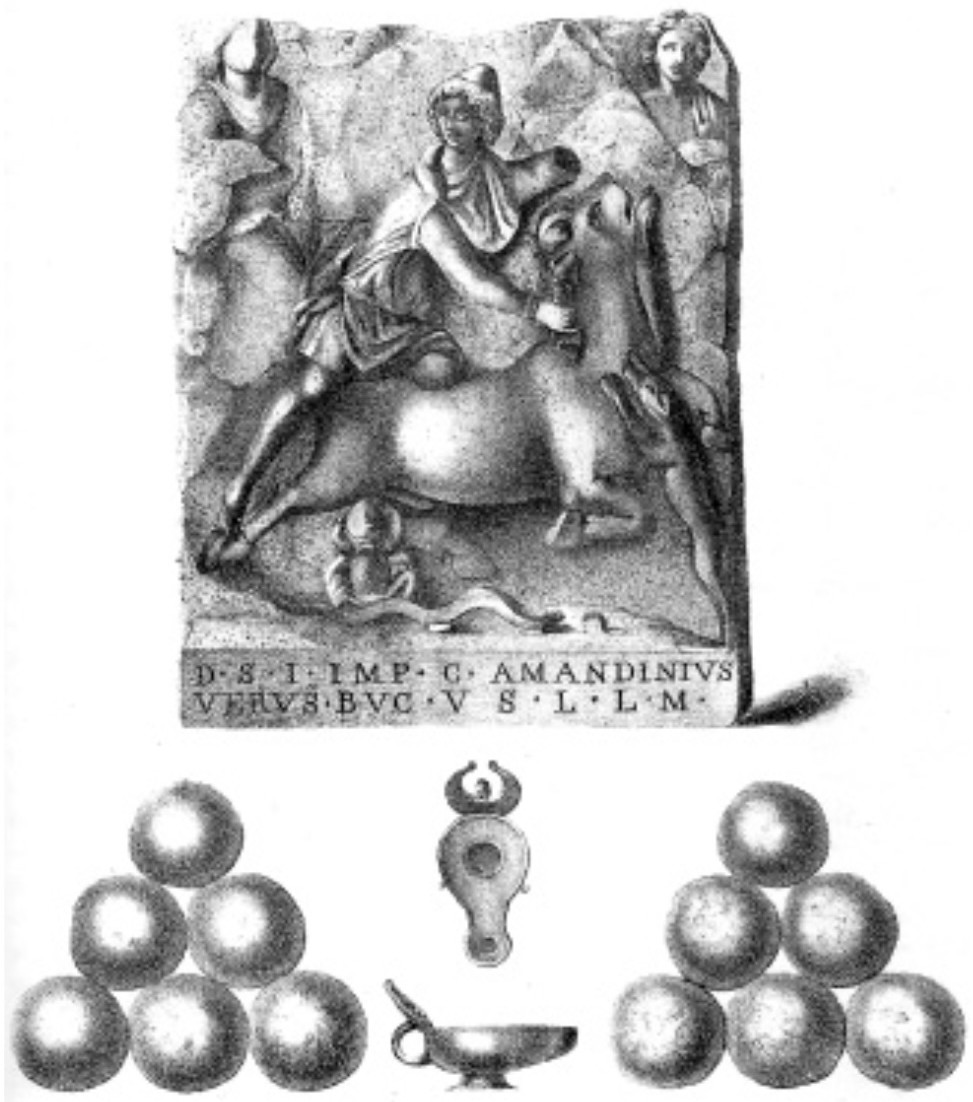 While there were many mithraea located at the forts on the Limes, there was not one at the Saalburg. A model mithraeum was built there at the time of the reconstruction of the Kastell Saalburg fort in the early 1900s, but this was done in the mistaken belief that the ruins of a building found near a Roman graveyard was a mithraeum. However, the Saalburg Kastell's museum does have an excellent exhibit of Mithraic finds from other Roman forts along the Wetterau Limes, including several large tauroctonies. Presently, there is a large display of Mithraic artifacts and art at the museum entitled Mysterium Mithras-ein antiker Geheimkult im Spiegel von Archäologie und Kunst. The exhibit also features the art of Frankfurt painter Farangis G. Yegane who has had several major exhibits at German museums since the 1990s. Yegane art is an excellent modern day tribute to the Mithraic spirit. The current exhibit at Saalburg is scheduled from 27 August 2011 to 22 January 2012. Der rät...

In the 1900s a model Mithraeum was built in Saalburg in the mistaken belief that there was an original temple of Mithras in an ancient Roman building.

Workman digging in a field near Dormagen found a vault. Against one of the walls were found two monuments related to Mithras.

I'm am a retired administrativee lawyer who worked for the state of Ohio.