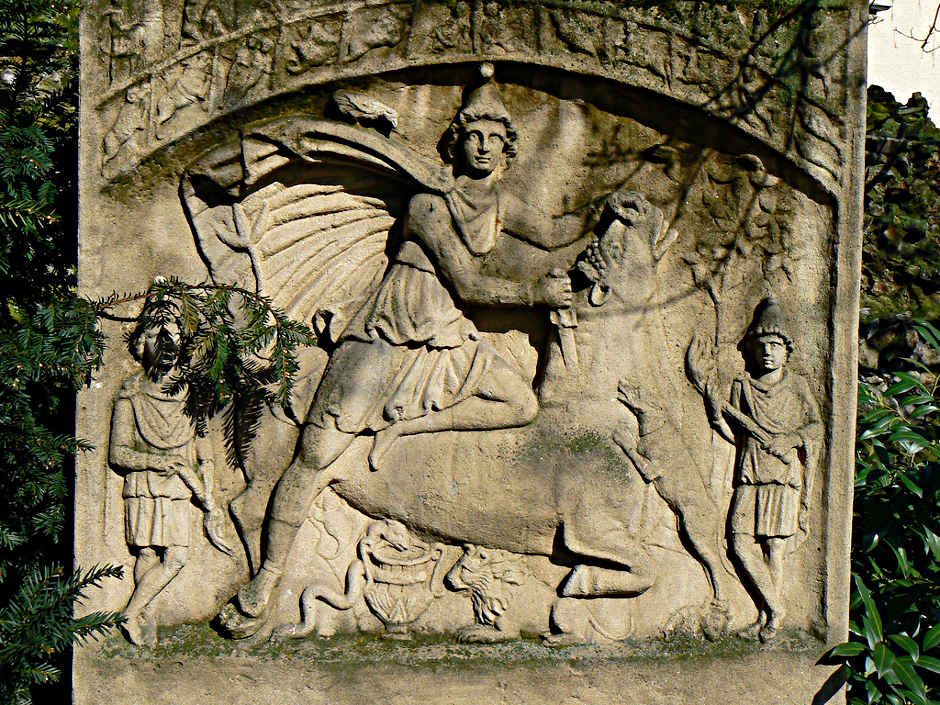 Since January 1826, there have been four mithraea found at Nida-Heddernheim which is located in a section of the city of Frankfurt am Main. The excavation of the first mithräum was made by Friedrich Gustav Habel. The major finds included a two sided cult relief that was on a pivot at the top and a socket at the bottom. The tauroctony is on the front side and shows Mithras slaying the bull.This is the best known tauroctony and is published in most books on Mithras. On the reverse side, Mithras and Sol are engaged in the communion feast. Sol is offering Mithras grapes. Mithras holds a drinking horn in his right hand. Between Mithras and Sol, there is a dagger which has a Phrygian cap hanging on its top. The dead bull lays at the feet of Sol and Mithras. There were a number of statutes found in Mithräum I including statutes of Cautes and Cautopates.

Mithärum II was also discovered in 1826 about 150 meters to the west of the first mithräum. The first and second mithräum were almost identical in size and shape. Habel was also in charge of the excavation of this mithräum. Fragments of both torchbears were found, but Cautopates was the only one able to be reconstructed. Cautopates' body was largely intact with his legs crossed and holding his torch downward with his right hand. In his upright left hand he holds a hooked stick which has been interpreted as a key. The cult relief was badly damaged and could not be reconstructed. There were also fragments of alters found in Mithräum II.

Mithräum III was found in a cemetery near Nida-Heddernheim in 1887 and was excavated by Georg Wolff in 1890. A relief of the tauroctony was found in tact, but was badly damaged during World War II. This tauroctony was different from others in that the bull's forelegs were raised to create the impression that the bull was killed in flight. The dog is leaping up with its head near the wound. A complete description can be found of the tauroctony and other sculptures which were found there in Georg Wolff and Franz Cumont's "Das dritte Mithraeum von Heddernheim und sine Skulpturen".

The best source for discussion of the four mithraea and the archaeological finds is Ingeborg Huld-Zetsche, Archäologische Reihe Mithras in Nida-Heddernheim: Gesamtkatalog published by the Museum für Vor- und Frühgeschichte Frankfurt am Main.